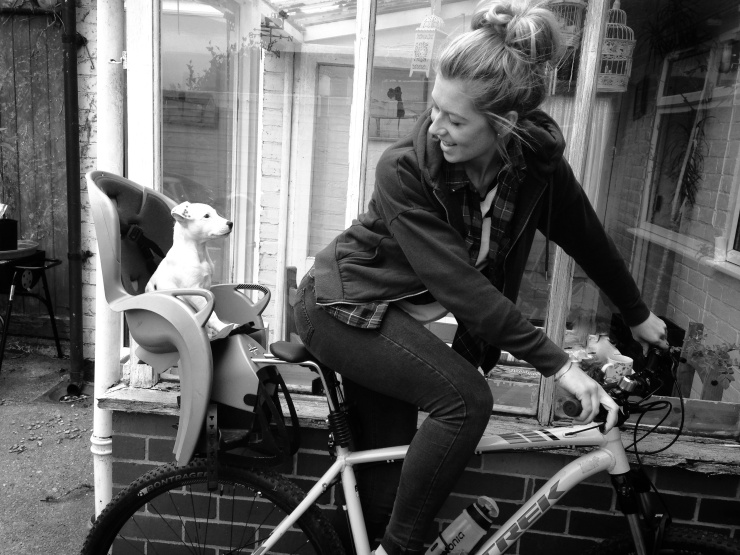 For those of you that don’t know Bell, (where have you been?!) she is a staffy x human. I did think she was a staff x collie, but now I believe she is probably a staffy x whippet x cat maybe? She is my biggest fan, my shadow and of course my best friend. She’s little yet super strong. Four years old and she’s the most loyal dog I’ve ever met; my best buddy. She came into my life after I’d gone through a break-up and felt super lonely. I’d been having a rough time, with little to focus on. My mum suggested that I should have a break from men and just get a dog. So I did! 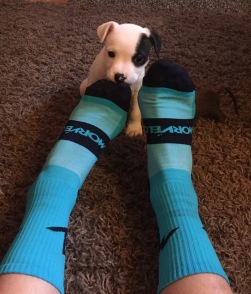 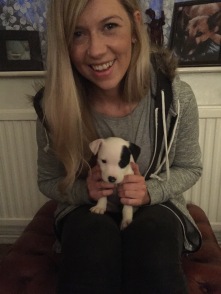 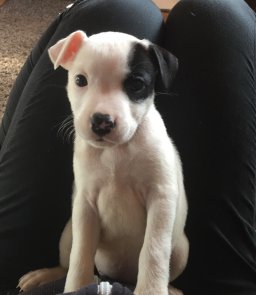 I chose Bell from a litter of four from a not very nice home in Stoke. She was right at the back of the pack and looked like a piglet. I’d arranged to collect her a month later but was asked to collect her after just seven days. She was only 5 weeks old and far too young to be away from her mum! This made me really anxious and super precious of her. The first night, she snuggled into my neck and every time I’d move her to go and do something, she would cry. I remember thinking: “Oh god, what have I done?” But she was so sweet and such a quick learner. And we bonded incredibly well: she quickly became my shadow. Obviously, getting her was the best decision I’ve ever made.I’d seen trail dogs about and was desperate to train Bell up. I researched a lot when it came to ‘trail dog’ training. My biggest concerns were about not pushing Bell too hard as a pup and causing long term damage on her joints so I didn’t actually begin taking her out on proper rides until she was 18 months (fully grown for her breed). I did however take her to the pumptrack so she could get used to the bike. Short and not too fast pump sessions became a morning routine for me and Bell. 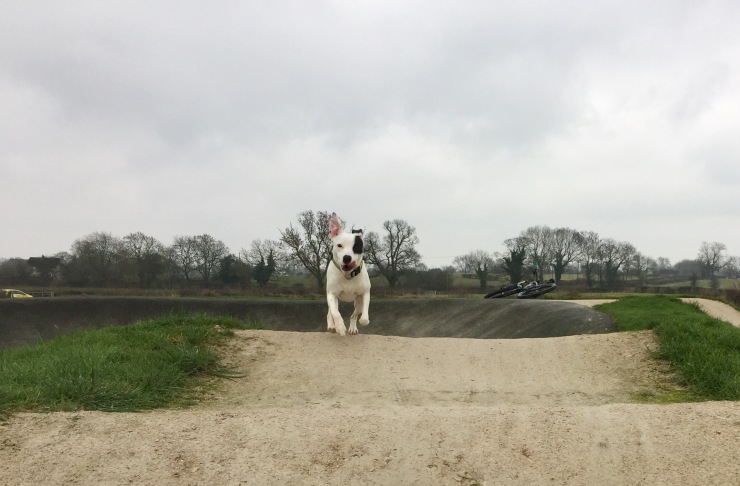 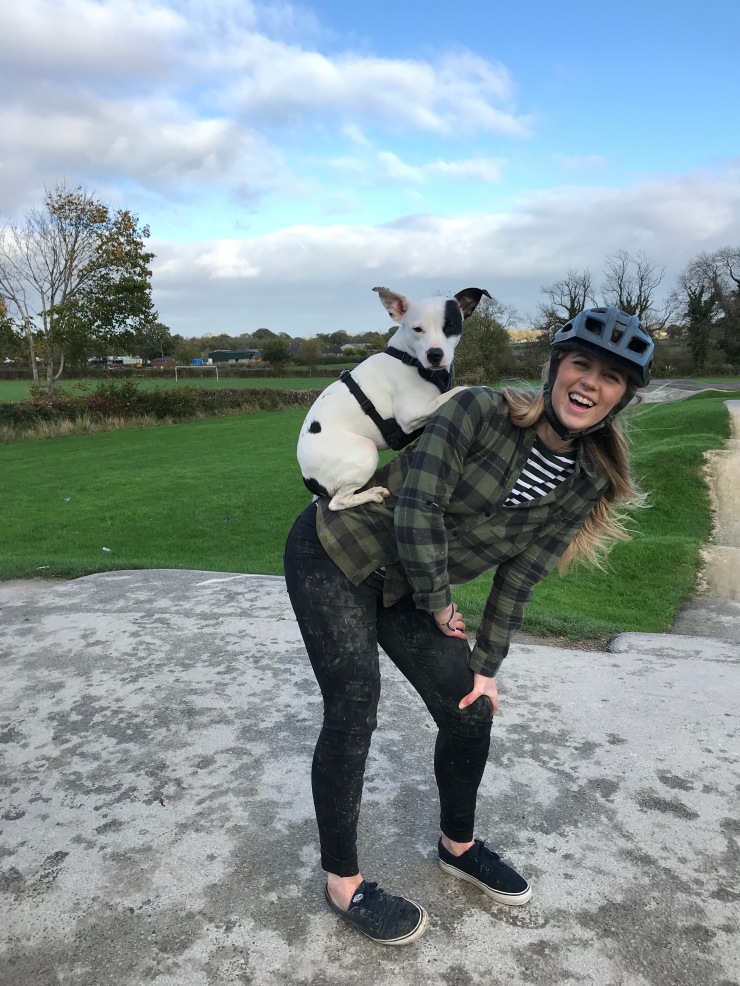 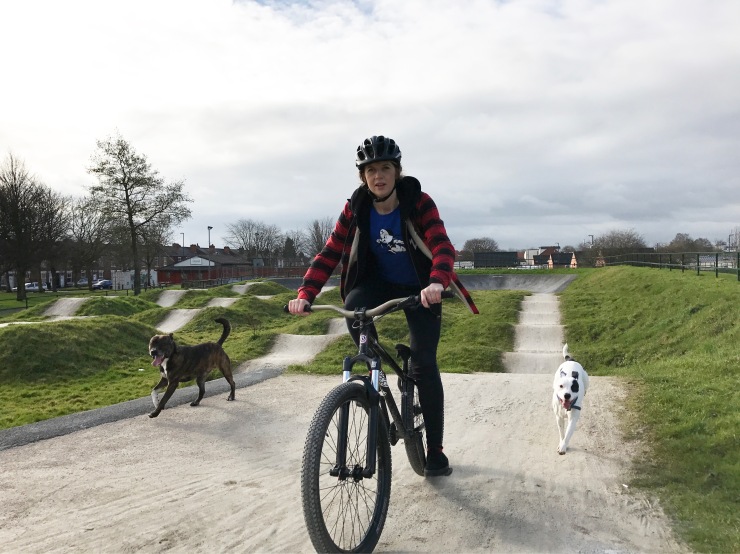 It was pretty boring to start off with, every time she tried to step ahead of me I’d stop and put her back next to my back wheel, such a long process but she eventually got it, apart from the odd sassy moment.For me a big factor of trail dog training is the loyalty part and how you’re gonna get them to stick with you. I’d read somewhere about playing hide and seek with your pup, I guess so that if I did lose her in the woods she’d maybe attempt to try and find me. I’d take Bell out onto the fields and run away from her and wait in the long grass until she had found me. Only thing was she got faster than me so wouldn’t give me chance to get away! 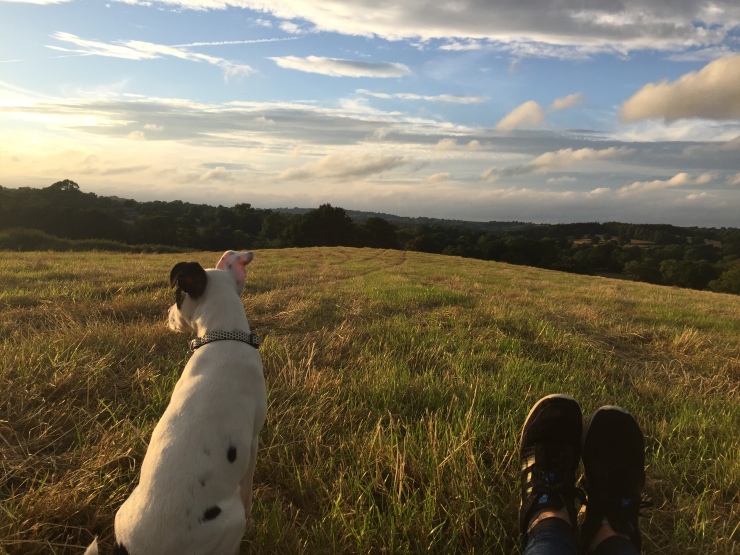 The first ride out with Bell on my mountain bike was quite nerve racking if I’m honest. I had fears of her running off ahead and then getting into trouble, her deserting me or being completely disinterested in the bike. Our first ride out we took along Reuben and Stanley, two very experienced trail dogs so that Bell had some experts to follow. We went into the local woods with as little hard packed stuff as possible to be kind to her paws. Started a short but sweet ride with optional cut off points along the way incase it was disastrous. Up the climbs I encouraged Bell to come to heel, but also let her have a good sniff around, regularly call her back so she would learn to respond quickly, tonnes of praise and treats. When stopping at the start of a descent I’d call her to heel at the back on my bike, ask her to wait, go and then call her to follow. The first few runs were a little janky, but she got the message relatively quickly. Every trail end that she hadn’t stepped in front of me I’d praise her loads and she would be SO Stoked. 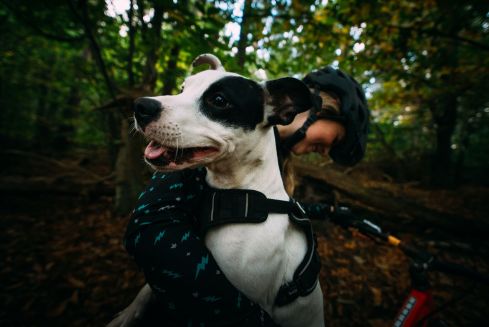 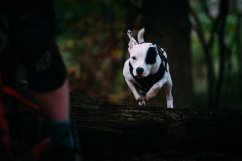 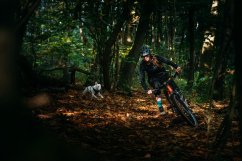 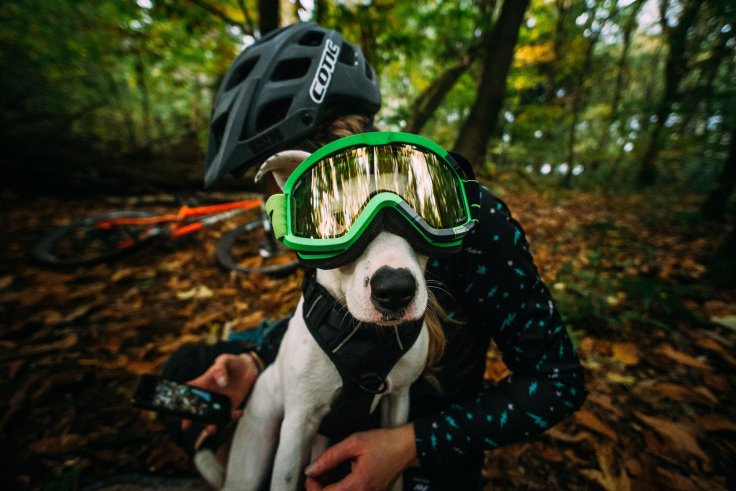 I prefer Bell to stay behind on at the side of me most of the time, but especially when descending. But I know lot’s of people do it differently. Personally I feel safer that way, knowing that she isn’t going to bugger off, get in my way or anyone else means I can relax more on a ride. If there is any danger, I’ll be the first to meet it, she can do what she likes on the flat, climbs and lead the way, but fast descents- I’m the leader. Super important that when she’s out with me, she should only follow me. Figured this would be handy to drill into her so she can come along to big group rides and if I headed to a trail centre she wouldn’t disown me. This is something I’ve worked super hard on with her, and 9 times out of 10 she gets it. To a point that if she’s behind me and I’m not going fast enough she will literally just bark at me in frustration but won’t overtake. 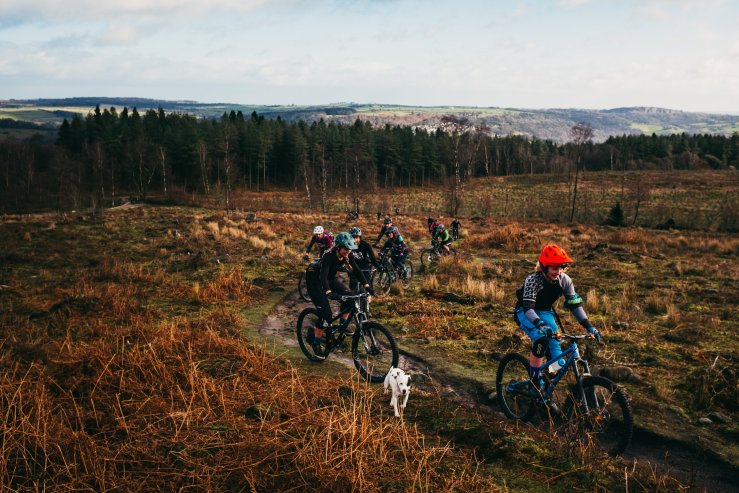 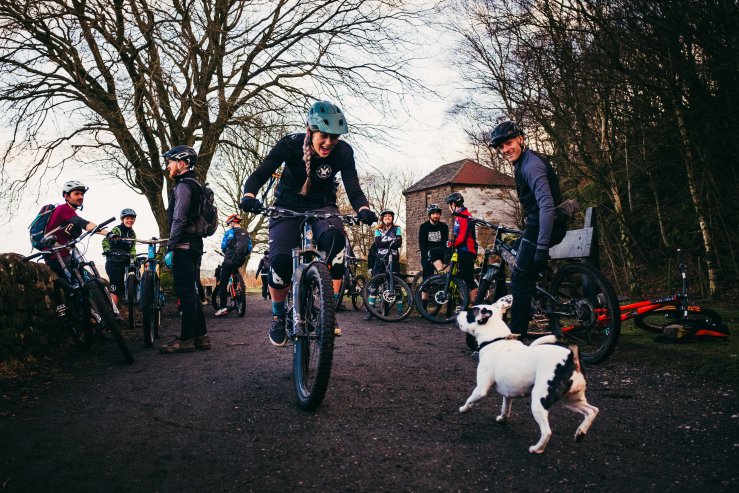 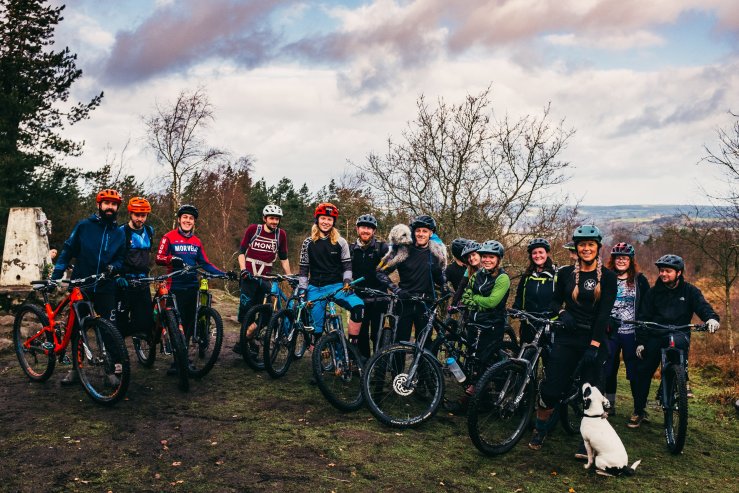 I’m not going to lie, I have been a pretty firm and direct mother which has resulted in creating a dog that is focused on me and only me. I seem to have given Bell the wrong idea about what happens when we stop at the end or beginning of a trail. When I first started taking her out, I was terrified I would lose her – or that she would shoot down a trail after another rider. So I’d call her up onto my knee while we waited. This has stuck, however. So whenever we stop, for any reason, she automatically jumps onto my knee. She obviously thinks this is what she’s meant to do. It’s pretty funny but can sometimes be annoying- like when she’s knocked drinks or the odd doughnut out of my hands. 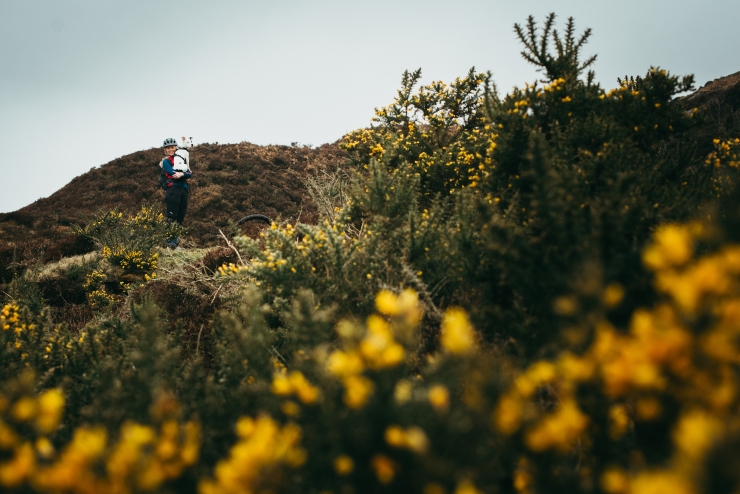 When she is out with me on the bike she doesn’t want to know any other dog or person, she’s a 1-1 kinda gal. Not sure whether this is a good or bad thing… yet. I’ve also managed to get her comfortable with being carried whilst I’m riding, on a long stretch of fire road or any road sections that I know will be fast-paced, I’ll carry her to save her legs. She doesn’t have a problem with that. She just sits back and enjoys the wind blowing through her ears. 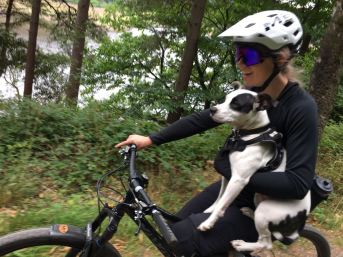 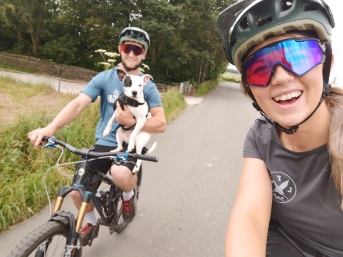 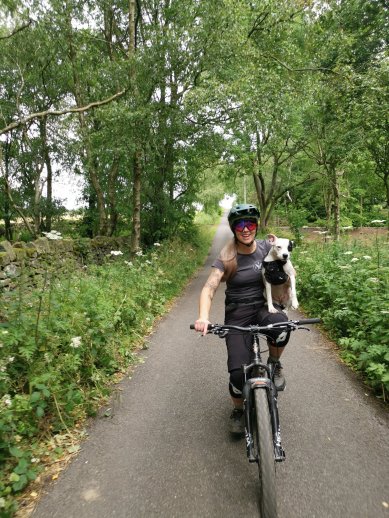 We also don’t over do it, I try to limit it to twice a week because I don’t want to burn her out. But it’s difficult leaving her behind – and she does get very offended. When I’ve been out without her and come home, she ignores me for a good hour (maybe even more). 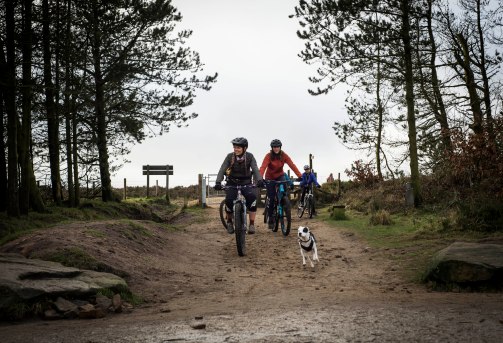 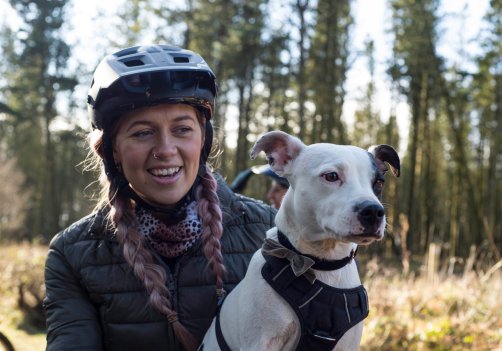 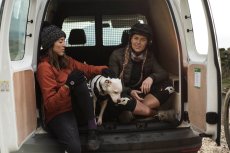 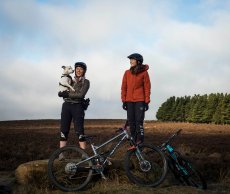 Bell loves any Cotic Women of Steel rides, she fits right in with all of the rad women. 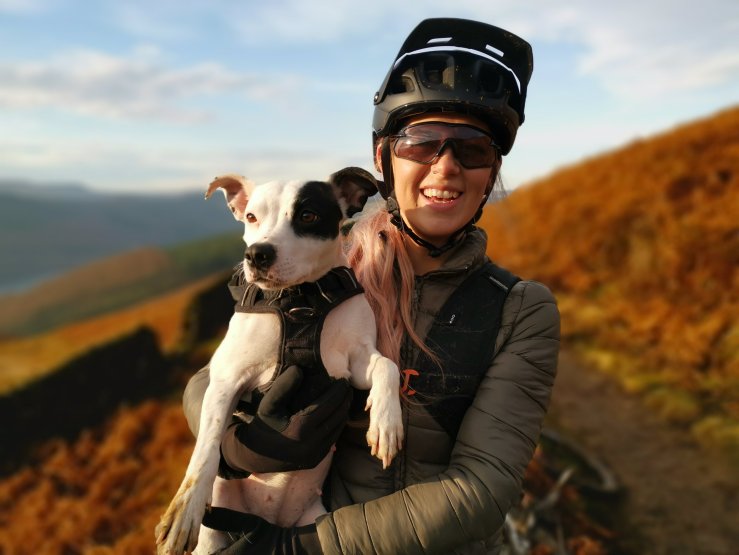 I love having Bell. She’s the perfect riding buddy. When I’m with her, it’s just awesome to watch how excited she gets- totally in her element. She’s buzzing off the same trails as I am and looks so stoked! She is the best company, a trail dog was definitely her calling. She was made for the role, my best bud, Bell. 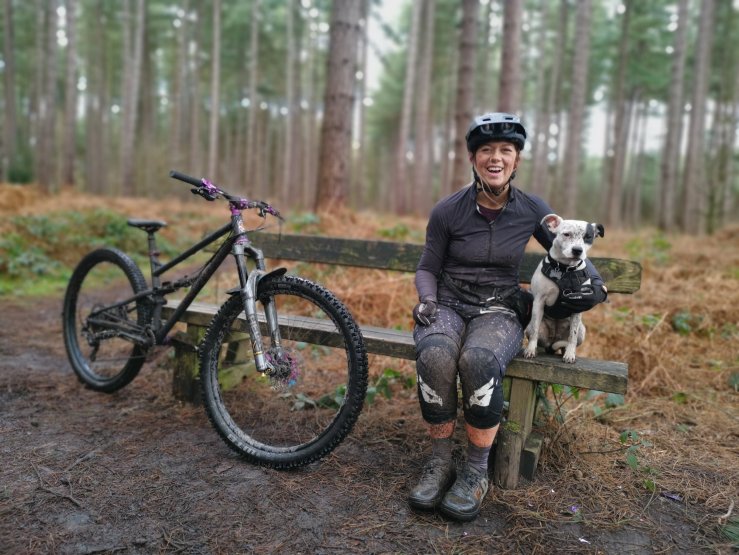 Big thank you to Phil, Darren and Hannah for the snaps!